‘Nation First, Always First’ is the theme of India’s 75th Independence Day celebrations at the Red Fort from where Prime Minister Narendra Modi is addressing the nation.

All the Olympians who won medals at the 2020 Tokyo Games have been sent special invites for the event.

Here are the live updates:

PM Modi says that in the 21st century no one can stop the development of India, and our strength lies in our striving, unity, keeping the country above all.

PM Modi continues, “Sri Aurobindo used to say that we must be more strong than before, change our habits, and with a new heart we must kindle our consciousness. This recalls us to what we also owe to our country.”

PM says that rights are important, but now duties must be prioritised, and every citizen must own this sense of duty.

Mr. Modi says that he believes in the power of youth and that when 2047 comes around, whoever will be the Prime Minister then will mention the achievements of the resolve that we made today.

PM Modi says that the world is looking at India differently in the prism of fighting terrorism and expansionism. “We are fighting both and giving an appropriate response. In the field of security we must be self reliant,” he adds.

PM assures says, “I assure all Indians that no effort will be spared to strengthen the hands of our armed forces.”

Security personnel on vigil at Red Fort on the eve of the 75th Independence Day Celebration.

PM Modi calls for Environmental Security, and admits that India is not energy independent and spends over Rs 12 lakh crores every year for energy requirements. He also asserts that we must resolve to make India energy independent.

“Our vehicle scrap policy is important in this direction, and among G-20 economies, India is one of the few who are speeding towards their climate protection goals,” he adds.

Mr. Modi says that a green hydrogen sector will give us a quantum jump in climate goals. He declares a National Hydrogen Mission for making India a hub for production and export of green hydrogen.

Mr. Modi says that today, India’s daughters are eager to take their place in the society, and we have to ensure equal partnership of women in the work place and education. He also adds that we must ensure that women feel safe on the streets and the police force and law enforcement should take a pledge to do so.

He says, “All Sainik Schools across the country will allow girls as students from now.”

PM Modi continues, “Unfortunately, in our country, there are divisions with regard to language. A large section of society is kept chained due to opportunities being tied to language. In the New Education Policy everybody’s mother tongue is prioritised.”

He says that sports have been made a mainstream part of curriculum rather than just an extra curricular activity.

PM Modi says that ease of living, ease of doing business are both important, and that labour codes, tax compliance are simplified.

“I ask all Central government or State governments to please review rules and regulation and weed out unwieldy ones. I know this won’t go in a day or year, but we must undertake a review,” he says.

PM Modi promises to undertake next generation reforms and to ensure last mile service delivery.  He continues, “In the past the government itself was in the driving seat, that may have been the need of those times but now citizens need to be freed from unnecessary regulations and laws.”

Mr. Modi says that during COVID-19 itself 15,000 compliances have been removed, and quotes the example of maps. He says that for the last 200 years Indians had no right to publish maps, and one could be arrested for doing so, but now every phone has a map via satellite and it was important for the old law to be gone.

PM Modi says that new start-ups are coming up in tier 2 and tier 3 cities, and the government is supportive of them in terms of policy and other issues.

He continues, “During COVID-19, 1000s of start-ups began, and many have become unicorns. They are a new kind of wealth creators.”

Mr. Modi also says that in order for the country to reform there has to be political will, smart and good governance, and the world is seeing that there is no lack of it.

Development of infrastructure | 8:50am

PM Modi says that we have to work together for generation of infrastructure, and for new age technology because modern development rests on world class infrastructure.

He says, “It gives wings to aspirations, this is the inspiration for the speed with which infrastructure is being developed on sea, air and land.

Mr. Modi also says that the Pradhan Mantri Gati Shakti master plan that is pegged at Rs. 100 lakh crore will be revealed soon and this will be the basis of a holistic and integrated pathways for all our developments.

He calls for increasing manufacturing and exports in the country. “We have to be quality conscious in our manufacturing so it can compete in global markets. Manufacturers should know what you sell globally is attached to India and this is why I say your every product is a brand ambassador for India.”

He says that everybody using Indian made products should use it with pride.

Agriculture and farmers | 8:37am

Mr. Modi continues, “During COVID-19 times we have seen the strength and commitment of our scientists, and the time has come to unleash the ideas and suggestions of our scientists in the agriculture sector.”

He says that agriculture and science are not just about growing fruits and vegetables, but it’s important that we talk about shrinking land holdings. He says, “80% of our farmers are those who have less than two hectares. The earlier policies did not prioritise the small and marginal farmers. Now the new agricultural laws with regard to seeds and fertilisers will strengthen these farmers.”

He says that income support for farmers is underway, and upto Rs 2 lakh crore has been transferred so far.

PM calls for the strengthening of the co-operative movement. He says that capitalism, communism are all discussions in economics of the country, but, “In India cooperative movement is important. Cooperatives are a spirit, a set of values, and collective will.”

He says that this movement needs to be strengthened and a separate ministry has been created for this purpose.

He continues, “The delimitation commission is going ahead with its work in J&K, very soon we shall see assembly elections there, and all the districts were declared for accelerated development and many of these districts are in tribal areas, and the work is on to bring them on par with other development.

Mr. Modi continues, “Very soon 1000s of hospitals in the country will have their own oxygen plants, and this time requires India’s full strength, and thus all marginalised communities need hand holding to reach the fulcrum.”

PM Modi continues, “Till now no one thought of street vendors, today these vendors are being connected to bank accounts via Swanidhi Yojana.”

He says that the tap water scheme- Jal Jeevan Mission is going at great strength and speed, and 100% coverage of these plans means that no one is left out nor is there discrimination or corruption.

He continues that government will be distributing fortified rice across all programmes for nutrition including ration shops, mid day meal allocations across the country.

Mr. Modi says that “Amrit Kaal (planning time) for the next 25 years must start from now itself to achieve transformational change not just for the country but for us as individuals. Sabka saath, sabka vikas and sabka Vishwas and now sabka prayaas is important,” Mr. Modi adds.

PM Modi also says that while programmes such as Ujjwala scheme to Ayushman Bharat is known to all Indians, we must also strive to reach a 100% coverage of roads in rural areas, electricity, bank accounts, Ujjwala gas connections.

PM Modi says that we have to make plans for the next 25 years to scale new heights of prosperity, where facilities do not divide cities and villages, where government need not intervene in the ordinary lives of citizens. “Resolutions are incomplete without hard work, therefore we must combine resolve and valour,” he adds.

Mr. Modi says that for every country there comes a time when it has to decide what direction it has to take, and for India, the time is now. He says, “Only celebrations cannot be the point of 75 years of independence.”

PM Modi says that there should not be complacency with regard to Covid.

He continues, “India’s low infection rate is good but not a reason for self congratulation. Our facilities compared to other countries are few, our population is larger than others. Collective efforts notwithstanding we could not save many, children were left orphaned. This unbearable pain will be forever with us.”

PM Modi says that in the last 75 years, the country has worked hard and with speed and the result of which is that our scientists and entrepreneurs assured us of our own vaccines to fight COVID-19. “We took so many years to get the Polio vaccine, and without our indigenous vaccines we would have had to wait for vaccines against COVID-19, and as a result we are running the biggest vaccination programme.”

Mr. Modi further says that we have vaccinated 52 crore Indians and the CoWin portal developed in the country for vaccine registration has made the whole process seamless and easy.

Mr. Modi calls partition of 1947 as one of the biggest horrors of the last century. “We celebrate independence but the pain of partition still pierced our heart,” he says. 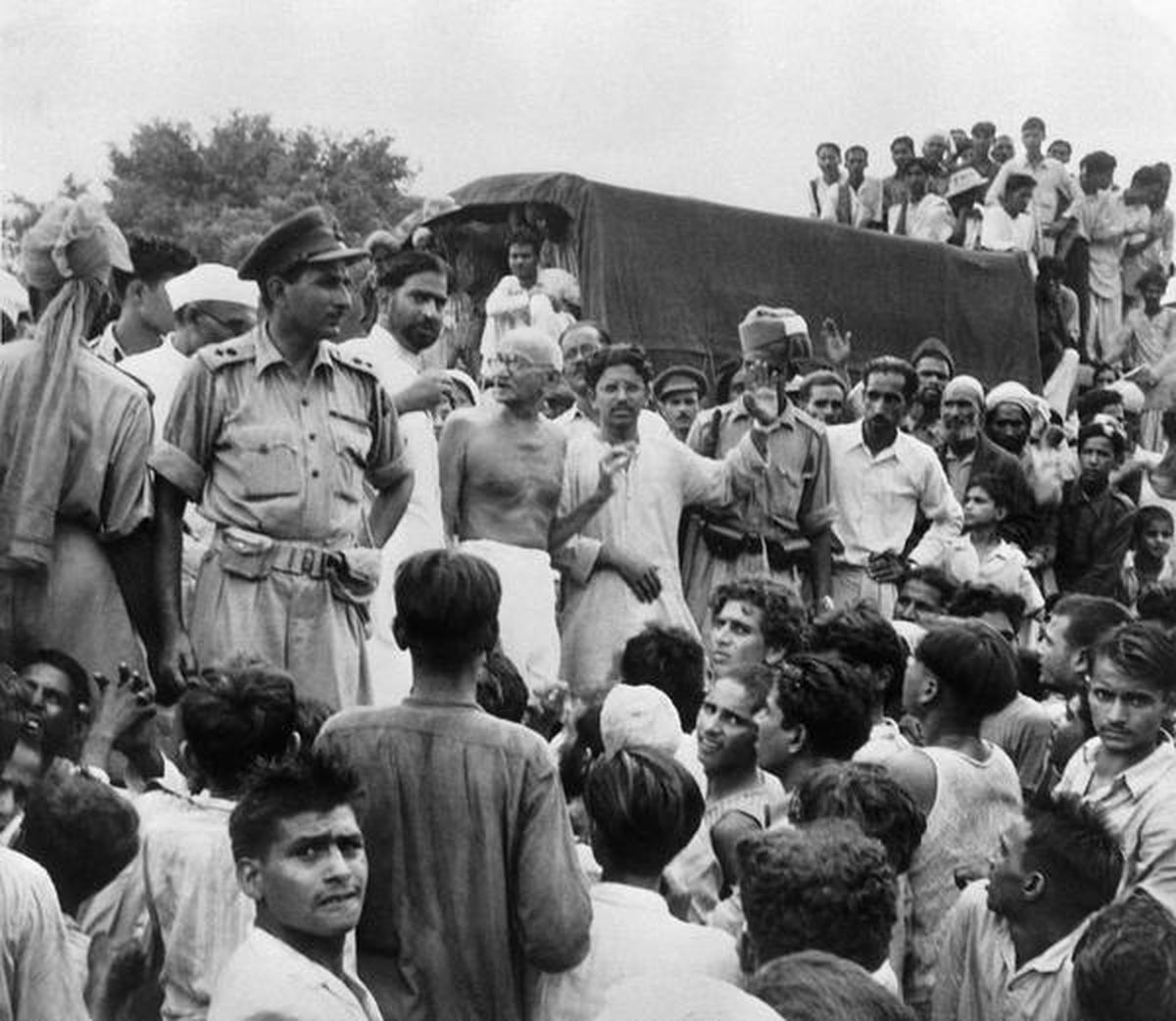 Mahatma Gandhi visits a camp of Muslim refugees at Purana Qila in New Delhi on September 22, 1947 as they prepare to depart to Pakistan.

Mr. Modi says, “Our nurses, paramedical staff, sanitation workers, those who helped develop the vaccines, all those who served the country every minute through the COVID-19 pandemic, they too are in our hearts.”

He also mentions the Tokyo Olympic athletes present at the Red Fort and says, “The Athletes have not just won medals but are an inspiration to a generation.”

Narendra Modi begins his speech by paying homage to all the freedom fighters who sacrificed their lives for India’s independence.

“Whether it was Rani Laxmibai of Jhansi or Chittoor Chennamma, Rani Gaindilu, whether our first Prime Minister Pandit Jawaharlal Nehru, or Sardar Vallabhbhai Patel, or the framer of our constitution Dr B.R. Ambedkar, India is remembering all of them.

Salt that Seasons: Postcard from Dandi