While the global smartphone shipments decreased drastically during early 2020 due to the Coronavirus-led pandemic, the smartphone market slowly gained pace again over the past year. Now, as per a report from IDC (International Data Corporation), the global smartphone shipments grew by over 25% during the first quarter of 2021. The total number of smartphones shipped by all vendors during the quarter amounts to around 346 million units.

“The recovery is proceeding faster than we expected, clearly demonstrating a healthy appetite for smartphones globally. But amidst this phenomenal growth, we must remember that we are comparing against one of the worst quarters in smartphone history,1Q20, the start of the pandemic when the bulk of the supply chain was at a halt and China was in full lockdown,” stated Nabila Popal, the Research Director at IDC’s Worldwide Mobile Device Trackers.

As per the IDC report, the accelerated growth of smartphone shipments is a result of strong growth in markets such as China and the Asia/Pacific region (excluding China and Japan). Two of the largest markets for smartphones saw growth of 30% and 28% respectively, accounting for half of all the global shipments, which is around 173 million units.

Moreover, as the market recovered from the demand, supply, and manufacturing issues caused by the ongoing pandemic, it shook the competitive scene a bit. For starters, Huawei is now finally out of the Top 5 manufacturers in the global smartphone shipment chart (image below) due to its controversies with the US Government. 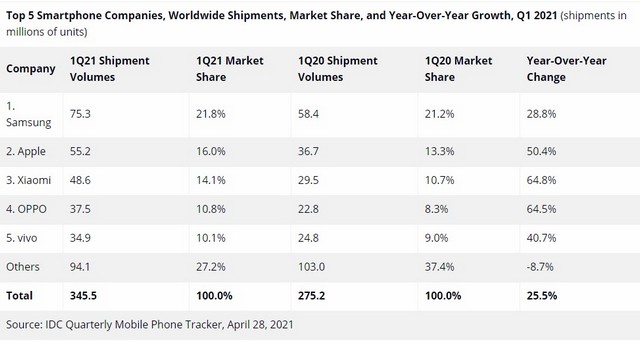 This paved the way for other smartphone manufacturers, mainly the Chinese brands such as Xiaomi, Oppo, and Vivo to climb up the chart. The said companies grew 14.1%, 10.8%, and 10.1% respectively to acquire the 3rd, 4th, and 5th positions in the global smartphone shipments chart.

According to the report, the low- and mid-range segment was also dominated by the above three smartphone brands as the higher-end market share was acquired by tech giants such as Apple and Samsung. In fact, Apple recently reported that it earned a whopping $89.6 billion in revenue during its Q2 of 2021.

Meanwhile, Samsung is back at the top spot as it shipped over 75.3 million devices during the said quarter, gaining a 21.8% market share. While Samsung’s growth was boosted by Galaxy S21 series, the iPhone 12 series did the same for the Cupertino giant with around 55.1 million units shipped. This led Apple to gain an even 16% of the market share.

Volkswagen's Diess to step aside at Skoda, Seat to focus on software: Handeslblatt By Reuters