Samsung has unveiled two new smartphones under its mid-tier A-series in India. The two devices, Galaxy A52 and Galaxy A72, were launched during a virtual event today. These follow the recently launched Galaxy A32 4G and Galaxy A21s in India, further expanding the Galaxy A-series in the country.

Samsung Galaxy A52 and A72 Launched in India

Before we get to the price and availability, let us take a look at some of the key specs and features of the two smartphones. Now, it worth mentioning that Samsung also unveiled a €429 Galaxy A52 5G in global markets. However, it will not come to the Indian market. Only the 4G devices make their way to India.

Starting off with the higher-end Galaxy A72, it boasts a 6.7-inch Full-HD+ Super AMOLED display with 2400 x1080-pixel resolution. There is also an in-display fingerprint sensor onboard. The panel supports a 90Hz refresh rate, up to 800 nits of peak brightness, and has an 84.8% screen-to-body ratio. There’s a 32MP punch-hole selfie snapper onboard as well.

As for the cameras, previous reports suggested that the device will come with a penta-camera setup at the back. However, that is not the case as the Galaxy A72 features a quad-camera array with 3x optical zoom. It includes a 64MP primary sensor, a 12MP ultra-wide lens, an 8MP telephoto lens, and a 5MP depth sensor. Moreover, in line with recent reports, the Galaxy A72 and Galaxy A52 are the first A-series devices to support Optical Image Stabilization (OIS). 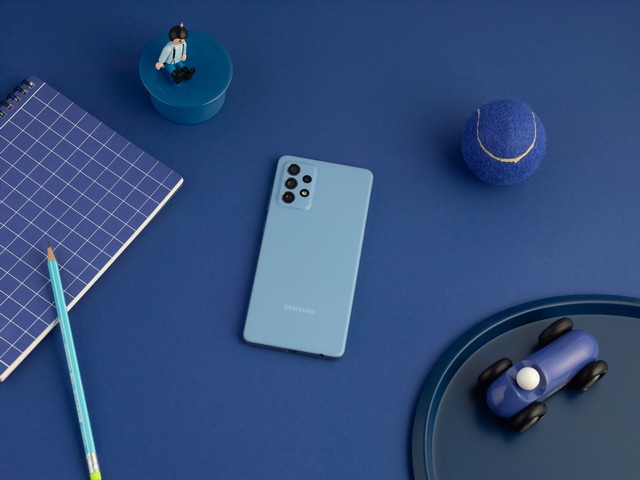 Further, the blog post says that the Galaxy A72 is powered by an octa-core chipset with two cores clocked at 2.3GHz and 6 cores clocked at 1.8GHz. Samsung did not name the processor but it seems to be the Qualcomm Snapdragon 720G. You also get 8GB of RAM and up to 256GB of internal storage (expandable up to 1TB through a dedicated microSD card slot).

To power these components, the device packs a massive 5,000mAh battery that supports 25W fast-charging. It charges via the USB-C port at the bottom. There is a 3.5mm headphone onboard as well.

The Galaxy A72 runs Samsung’s OneUI 3.1 skin based on Android 11 out-of-the-box and will also be eligible for the promised four years of Android updates.

Now, the Galaxy A52 is pretty similar to its sibling, the Galaxy A72. However, instead of a 6.7-inch display, the device comes with a smaller 6.5-inch Full-HD+ Super AMOLED display with an in-display fingerprint sensor. It has the same resolution and supports a 90Hz refresh rate.

There is a similar 32MP selfie punch-hole camera at the top but the quad-camera setup on the rear differs a bit. It includes a 64MP primary sensor, a 12MP ultra-wide sensor, a 5MP macro sensor, and a 5MP depth sensor. The 3x telephoto lens has been switched out for a macro sensor. Furthermore, the A52 also features OIS much like the A72. 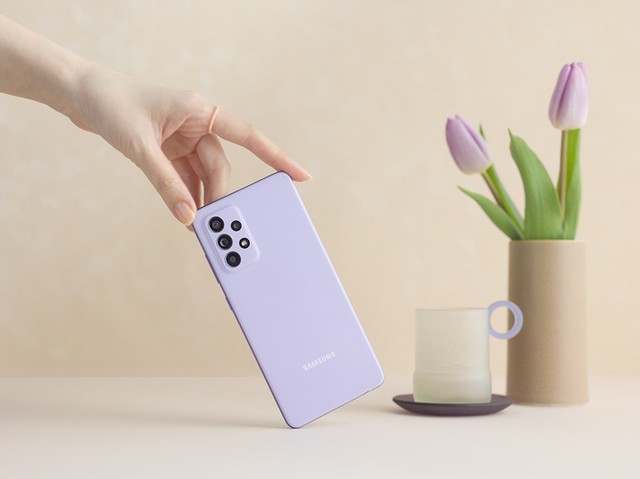 Galaxy A52 packs the same Snapdragon 720G CPU and will be available in two RAM and storage configurations – a 6GB + 128GB model and an 8GB + 256GB model. This model also has a dedicated microSD slot to expand the storage up to 1TB.

This smartphone has a smaller 4,500mAh battery and supports 25W fast-charging via the USB-C port at the bottom. It runs OneUI 3.1 based on Android 11 and will also be eligible for the four-year Android update program.

Though Samsung has not shared the official Indian prices of these two new Galaxy A-series phones, the prices were leaked online earlier this week. So, here are the leaked prices of the respective models: